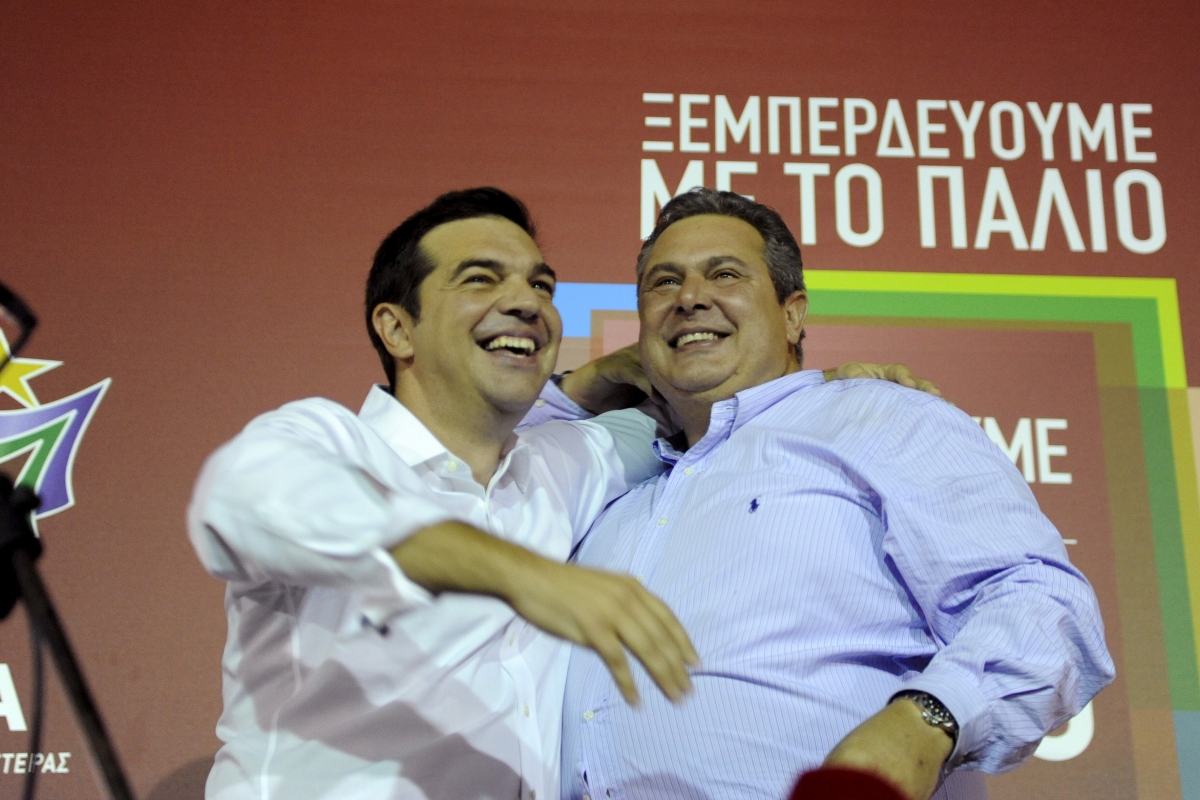 As Westminster does its best to tear itself apart, the Greek parliament has been playing out its own internal drama – between two very strange bedfellows. The most paradoxical coalition in the European Union has finally come to an end: the far-right Independent Hellenes – or ANEL – under the leadership of Panos Kammenos, walked out of their coalition with the radical left party Syriza, led by prime minister Alexis Tsipras. While managing to weaken the government, enough ANEL members of parliament have remained to keep the shaky coalition standing.

Tsipras was elected on what many saw as a positive yet anti-establishment platform, but his leadership has brought darker elements with it. His ex-coalition partner Kammenos is openly antisemitic (he has said that Greek Jews do not pay taxes) and an ultra-nationalist. As defence minister in the Tsipras government, he often dressed in military uniform and embarked on provocative helicopter tours over islets disputed with Turkey. But this has nothing to do with why he and several members of ANEL left: he left the coalition because he disagrees with the treaty signed by Tsipras with Zoran Zaev, the prime minister of North Macedonia.

It is a bold, historic agreement, that brings to an end 30 years of diplomatic tension over Greece’s persistence that Macedonia be called otherwise on the grounds that an adjacent geographical region in Greece has the same name.

Macedonia is a region shared between several Balkan states inherited from times preceding the nation-state era. In 1991, following Yugoslavia’s break-up, one of its six constituent republics, the People’s Republic of Macedonia, declared its independence. Greece has believed its chosen name conveyed territorial claims on the Greek region of Macedonia. Successive Greek governments blocked the new republic’s attempts to join the EU and Nato. After 27 years the two countries have finally reached an agreement. In an unprecedented move for a European modern state, Macedonia agreed to rename itself the Republic of North Macedonia.

But the majority of Greeks are still not happy. Opinion polls suggest that 70 per cent of them oppose the deal.

It is not an easy task to explain the vicissitudes of Alexis Tsipras’ tenure as prime minister. He came into office in 2015 as the rising star of the European radical left, threatening Germany to activate the ‘nuclear option’ unless the austerity measures were withdrawn. He even closed down the Greek banks – a decision encouraged by his then Finance Minister Yanis Varoufakis – and called a referendum. Foreshadowing Italy’s eventual fate, he chose to form a coalition with the anti-establishment nationalists of ANEL instead of the pro-EU centre-left parties of Pasok and Potami.

He then proceeded to accept all European demands for countering the financial crisis, and recently welcomed Angela Merkel in Athens describing her as a great ally in the fight against austerity. Tsipras claims to embody moderation and responsibility. He portrays himself as a centrist saviour who encourages free market solutions and foreign investment.

But how far from Syriza’s radical-left roots can Tsipras really move?

Greece’s economic adjustment is not the result of centre-ground policies – far from it: fiscal convergence was achieved only at the cost of imposing an enormous tax burden on the middle class. Currently, a self-employed businessman who makes 50,000 euros a year hands over 32,000 euros to the state. A worker whose pay is 18,000 euros costs double that amount to his employer, due to excessive social insurance contributions. At the same time, Tsipras has persisted with a preposterous pension system: Greece pays out more in pensions that any other European country.

The middle class is often demonised as ‘the rich’ by Syriza ministers. This leopard clearly has not been able to change its spots.

From start to finish, Syriza’s government has been a contradiction.

On the one side, there’s the historic agreement for the Macedonia issue and bold laws in favour of gay couples. On the other, behaviours that recall Hungary’s Victor Orban: tax raids on the offices of political opponents and denouncing judges for subverting the state when their decisions are not to the liking of the ruling party.

And extreme populism was not expunged from the government with the departure of ANEL. Syriza’s choice for defence minister to replace Kammenos was an active naval officer, who a few days earlier had come to the attention of Greek public opinion for saying that he would blow out of the water any islet on which Turks dared come ashore. One of the most prominent Syriza backbenchers recently said that elections may be held in October, but ‘that was also what people expected in 1967’: in 1967 a military coup ushered in seven years of dictatorship. With the best of intentions, it is impossible to describe Syriza’s political stance as ‘centrism’.

So far, Tsipras’ coalition has been able to survive with the support of moderate opposition MPs. But these may be his last big decisions as prime minister.

If polls are correct, the centre-right New Democracy and their leader Kyriakos Mitsotakis – a liberal conservative – will sweep to power in October’s elections. Mitsotakis, a liberal conservative, is taking advantage of Syriza’s harsh tax policy and telling a much more compelling story to middle ground voters. He promises less taxes, a more business-friendly environment and cuts in state spending.

The next general election will be a fight for the centre ground – and the left is set to lose it.