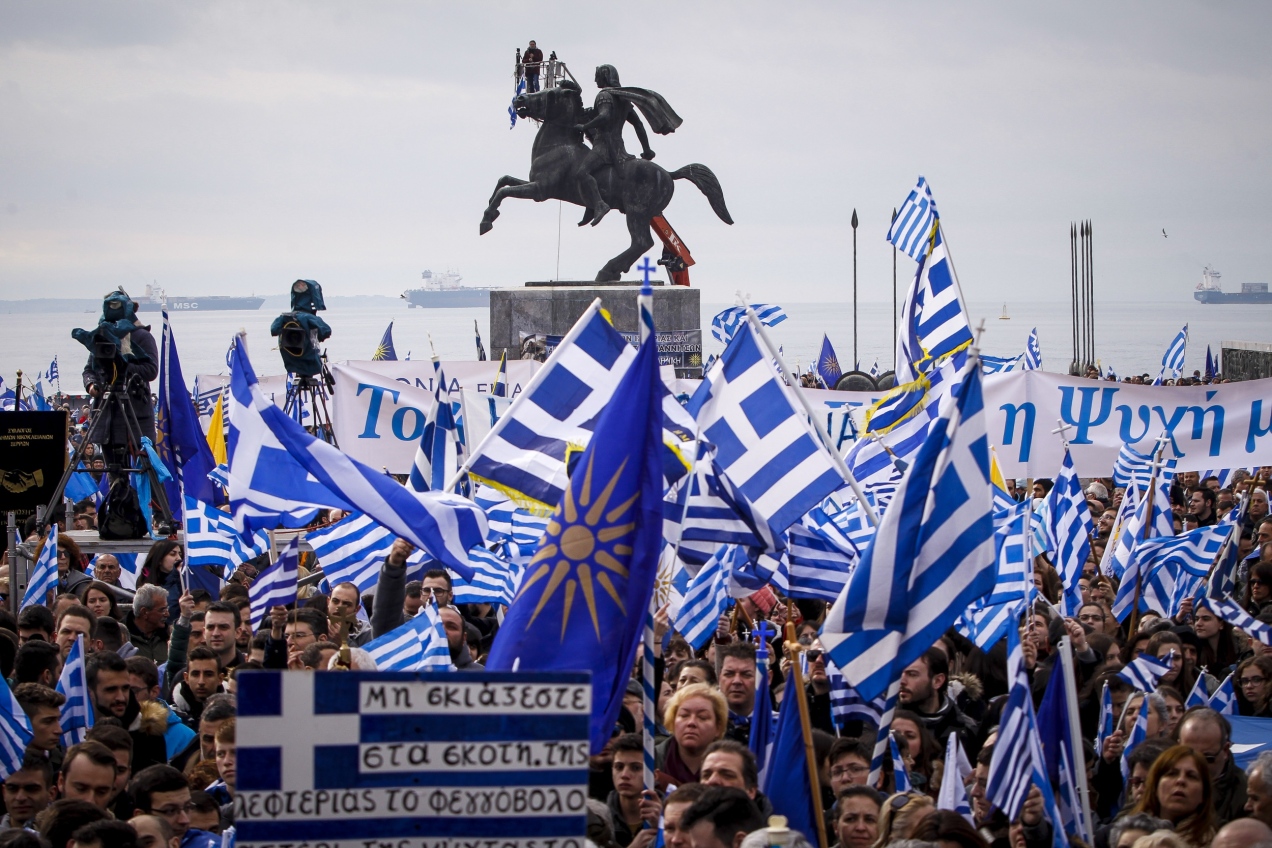 About two months ago I ordered a cup of coffee at the cafeteria of the House of Commons.The girl who was making the coffee asked me where I am from, because my accent sounded familiar. When I answered that I am from Greece she smiled, saying that she had thought so, being from Macedonia herself.

I told her that I have passed through her country, on my way to Serbia. When it was time to pay, she did not take my money: “The coffee is on me, because you are the first Greek I have heard say ‘Macedonia'”.

As I recount this incident, I am assailed by doubts as to whether I should be doing so. I fear, first, that I am describing myself as a way-cool, open-minded liberal urging those compatriots of mine who feel offended because a neighbouring country is using the name ‘Macedonia’ to relax.

I also fear that some Greeks will regard me as a traitor. And lastly, for a few moments there I felt like an idiot for exchanging the family silver for a caffe latte. I know many people who think as I do. I have no friends in Greece who say ‘Macedonia’ when they refer to Macedonia. No colleagues who can write down that name without placing it within quotation marks, not even those who couldn’t care less about the matter of the name. That is, those who indeed forgot, not in 10 years, as prime minister Constantinos Mitsotakis had once predicted, but in 10 minutes.

In 1991, the Greeks, with massive demonstrations and active diplomatic manoeuvring, had denied to the neighbouring country, which had just gained its independence from the former Yugoslavia, its right to call itself Macedonia.

The Greek argument was that a region within Greece was also called by that name and that former Yugoslav Macedonia would claim it. The issue remains unresolved to this day.

Of course, this whole affair about the name of Macedonia is over. A double appellation has prevailed.

The country is called Macedonia by all the world, and Skopje in Greece. If ‘Skopje’ as a national designation does not exist abroad, then the same applies for ‘Macedonia’ within Greece.

The intense diplomatic activity of recent days and the meeting between the Prime Ministers of Greece and Macedonia, Alexis Tsipras and Zoran Zaev, at Davos, have raised expectations that the issue may be formally resolved after 27 years.

Macedonia may finally acquire a regular, formal appellation to be used by international organisations, perhaps Nova Macedonia or Macedonia of the North, which will differentiate it from Greek Macedonia and so appease the Greeks.

However, this glimmer of hope, or an “erga omnes” solution as the Greek side likes to say, is not really of interest to anyone else. No one, nowhere, will be using the new name.

The rest of the world is right, not Greece

Who is right? The rest of the planet is right, not Greece.

It is not possible to call a country by the name of its capital city, nor to demand that a third country call itself as we would wish.

Noone in Greece seriously believes the story about Macedonia’s irredentist aspirations, so that we could ask anyone in Britain to do so.

How on earth could one of the poorest countries in Europe, with grave national minority problems of its own, a country which ardently wishes to join NATO, pose a threat to a country five times as large and as powerful?

Therefore, those of us who have no problem with this, can stop acting like officers of the ministry of foreign affairs, placing Macedonia within quotation marks in our writings or using tongue-twisting acronyms: PGDM (FYROM) is the no vowels appellation that Greece has provisionally accepted.

Let us call it ‘Skopje’ in Greece so we do not end up with a blackened eye, and ‘Macedonia’ when we are abroad so people don’t think we are idiots.

Because the whole world does not merely call Macedonia ‘Macedonia’, but considers the Greeks insane in their persistence that it must be called otherwise – especially since we have never once in these past 30 years explained to anyone what it should be called instead.